Completing quests while following the storyline of Bless Unleashed PC allows players to enrich their knowledge about the game, and gain additional XP to quickly level up their characters. Some quests have character level requirements.

There are 7 types of quests in Bless Unleashed PC.

Campaign Quests feature the main storyline in Bless Unleashed, telling the tale of the [Pyreborn].

These quests must be completed to unlock new regions and further progress through the storyline.

Completing Episode Quests grant new insight into the famous figures and events encountered on your adventures. These quests will improve your understanding of the Campaign Quests.

Side Quests feature the local stories of different areas in Lumios.

Some Side Quests require the completion of a previous Side Quest or Campaign Quest before it can be begun.

There are also repeatable Side Quests, and the number of times these quests can be repeated are reset daily at a set time.

There are three types of Regional Quests: unique, elite, and normal, and they each last for 7 days, 1 day, and 3 hours respectively.

Even if a player quickly completes a Regional Quest, they may only begin the next quest after the quest’s scheduled time has ended.

Various currencies and reward chests can be obtained by completing these quests.

Regional quests are categorized based on the type of task they require.

These quests are unlocked once you have completed the respective region's Campaign Quest, your Reputation with the faction is Friendly or higher, and your character has reached level 25.

New Prestige Quests are available every 7 days, and Reputation points and reward chests can be obtained by completing these quests.

Union Quests are renewed daily at set times. Players may obtain Union points and Union XP by completing these quests.
Please note that Union quests are given at random.

Crusades are cooperative quests that occur in specific areas in each region.

- Only players who meet the Crusade requirements can participate.

- These quests take into account the contributions of all players who participated.

- Rewards are given to players based on their contribution.

There are two types: Crusades and Invasions.

- Crusades are based on events that occured within the region. These quests last for 20 minutes, and have a cooldown of 4 hours.

- Invasions are based on the invasion of creatures from another dimension. These quests last for 40 minutes and have a cooldown of 8 hours.

If the quest was completed faster than the scheduled duration, the cooldown will begin after all rewards have been collected.

Quests in progress are shown on the right, where up to 4 quests are displayed.

Press [J] to see all in progress quests. Quests displayed on the gameplay screen can also be edited here. 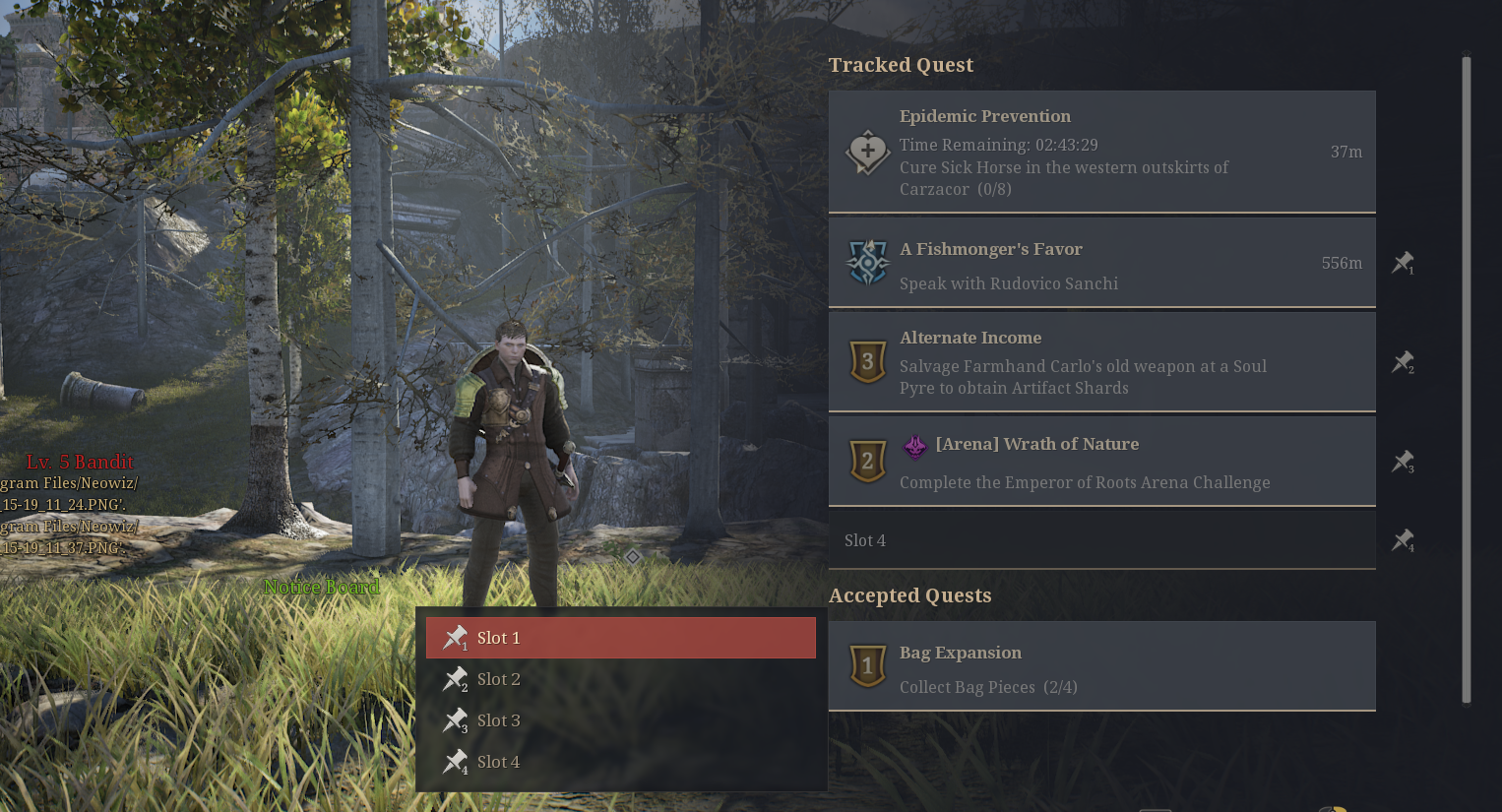 The following information can be found by going to Menu(Esc)  >  Quest Log.

Clicking on the Quest Guide icon will highlight the quickest path to your objective with a glowing trail. 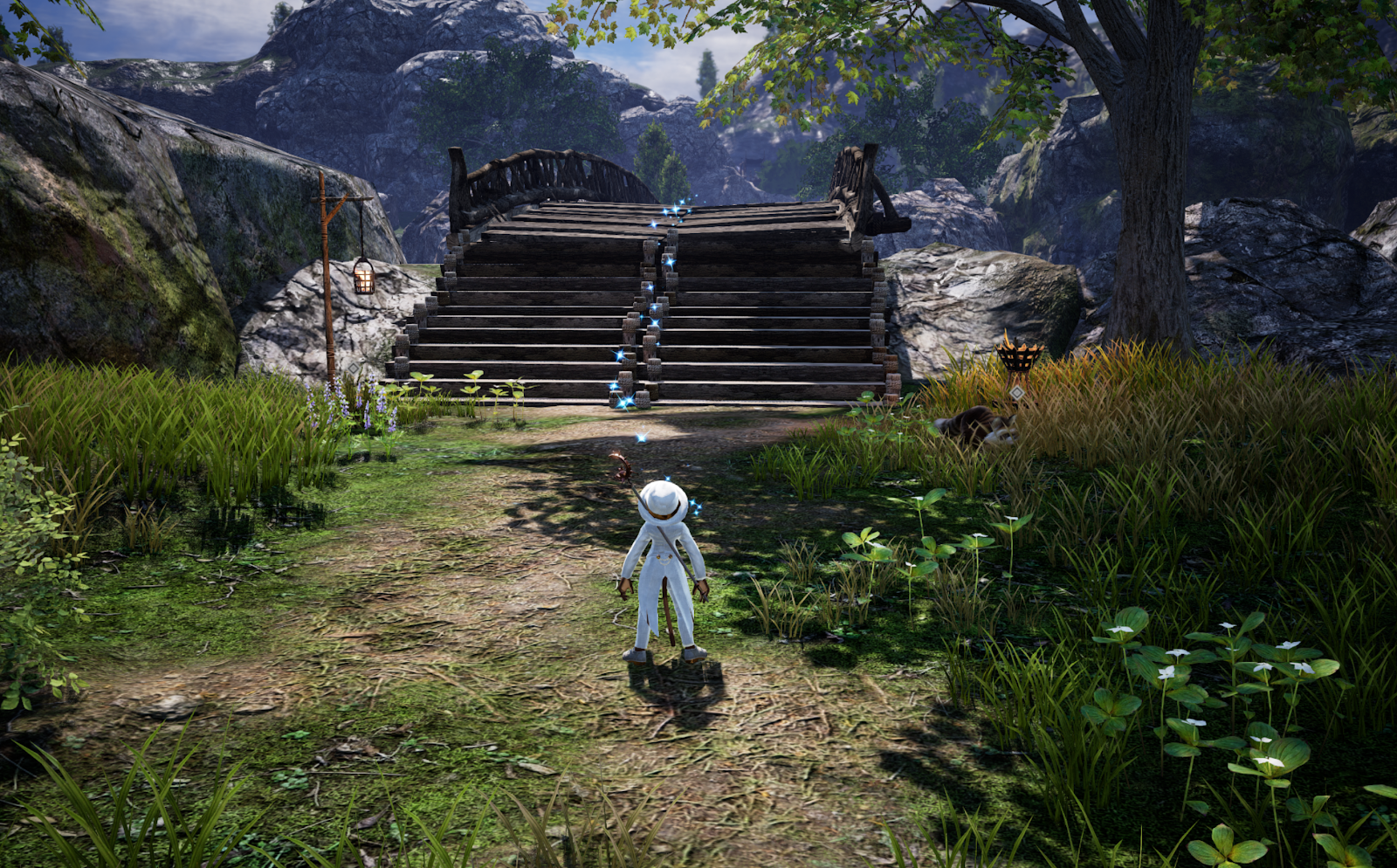 Steps to abandon a quest are as follows.

2.  Select the quest you want to abandon from the list of ongoing quests, and press [F].

4.  The quest is abandoned.

*  Campaign quests and some quests cannot be abandoned.

Information on Crusade locations and time remaining until activation can be found on the World Map. 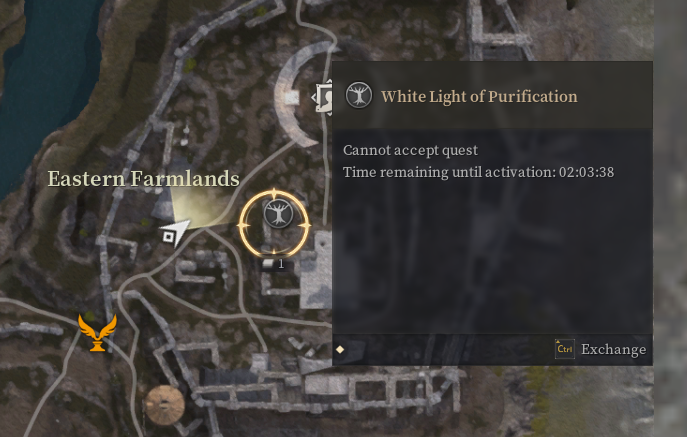 When a Crusade becomes available and can be activated, either an object that can be "Prayed" to will appear in the area, or "Quest Available" will be shown in the quest information window once a certain number of a specific monster has been killed within the area. 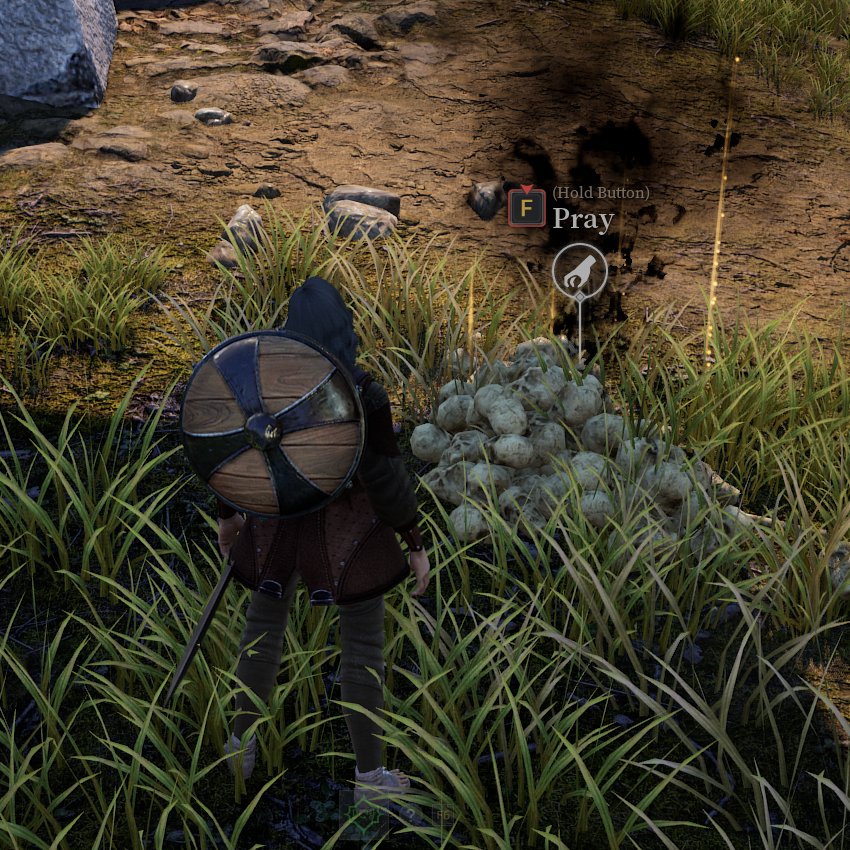 Crusade activation requirements take into account contributions from all players in the area. Once activated, all nearby players who meet the requirements to perform the quest may participate.

The Crusade's goals and time remaining can be found on the right side of the screen.

Information on the activated Crusade quest can also be found on the World Map. 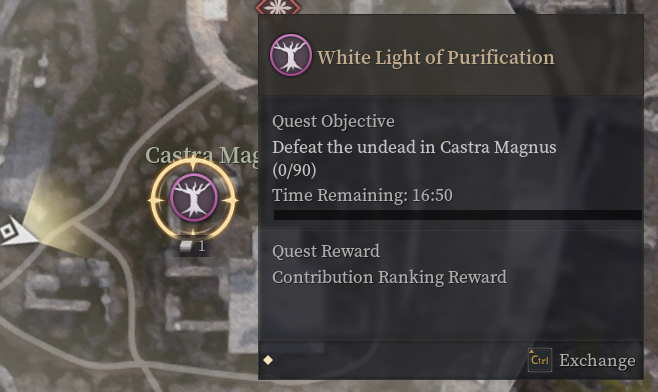 Complete the quest objective together with other players within the given amount of time.